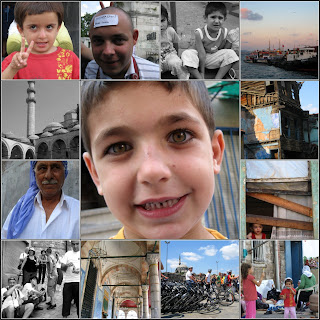 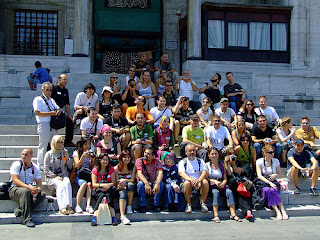 I ran accross this lovely window in one of our safari's.It was during our safari in Heybeli Island.
The island is very well known with its warm atmosphere.Is also known as the island of writers as many of them have their residences here.
Old buildings, a tiny lovely church , some old style shops, people riding their bikes , smiling coachers on their glamorous phaetons, cute delicatessen shops and lots of other great details like these.
But what striked my attention was this genuine window.Those plastic flowers killed me..Such a naive decoration feeling!And those pots, so regularly positioned pots , ain't them unbelieveable?I can imagine the jam , I can smell the mommy odor , the wellbeing from 1 km apart!I remember of the sunny sundays, long family breakfasts, picnics, our playground, the gossip addicted neighbour and I'm grabbed in an intense nostalgia effect.
Miss those days, with all their naivite! 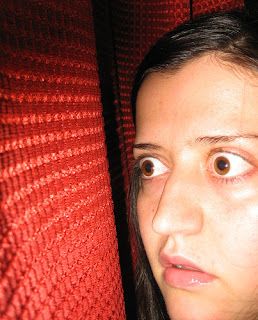 I was reading my friend's Blete's last post about "tears " and I paid most of the attention at one of the post's sentence.
She writes to be standing in front of a mirror watching herself while crying and controlling her mimics to enhance the dramatizing effect.

I felt this part to be so terribly true.I have done this always without being conscious.I think people can't help theirselves to feel kinda acting even on their normal expressions of their behaviours.
Not just on happy moments ,even on your worst moments , we tend to add some acting ,some drama to our behaviours.I'm not saying we do it on purpose , on contrary , we don't even realise it.But it's like that.Maybe we do it to express better our feelings , who knows?Or because all of us have that hidden hero that blows suddenly on this cases.
What I can't understand is how can this happen when we're upset?Isn't this so strange?How can we think of acting at this time?
But trust me, we do it, at least I do!Maybe we do it to express better our pathos , who knows?One thing is for sure: This is a very naive kind of acting , as it's natural,so it bears not any intention for emotions corruption.
What do ya think about that?

Last day I was just passing through Galata (Beyoglu,Istanbul) and I came across these peruvian singers.I love their kind of music and the instruments they use.Makes the melody so relaxing.They' were also selling some ethnic objects as well , cool things! It was the first time I came accross some peruvians and I enjoyed this experience..To keep on with this country's atmosphere I'd like to share one poem of a peruvian poet , whose poems I find spiritually so powerful!Hope you'll enjoy too!

There are in life such hard blows . . .
I don't know!
Blows seemingly from God's wrath;
as if before them
the undertow of all our sufferingsis embedded in our souls . . .
I don't know!
There are few; but are . . . opening dark furrows
in the fiercest of faces and the strongest of loins,
They are perhaps the colts of barbaric Attilas
or the dark heralds Death sends us.
They are the deep falls of the Christ of the soul,
of some adorable one that Destiny Blasphemes.
Those bloody blows are the crepitation
of some bread getting burned on us by the oven's door
And the man . . . poor . . . poor!
He turns his eyes around, like
when patting calls us upon our shoulder;
he turns his crazed maddened eyes,
and all of life's experiences become stagnant,
like a puddle of guilt, in a daze.
There are such hard blows in life.
I don't know

Some truths about my blog :)

This rating was determined based on the presence of the following words:
death (6 times)
torture(2 times)
heroin (1 time)
I had a strange feeling my blog was a restriced movie:))
Posted by eni at Sunday, July 15, 2007 8 comments:

If I gave you a ticket--Nese do te jepja nje bilete? 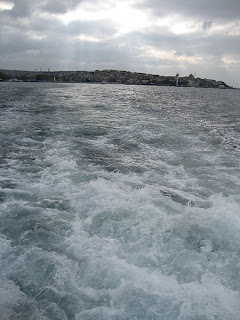 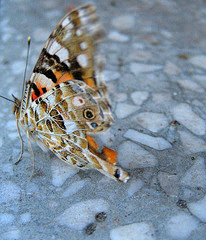 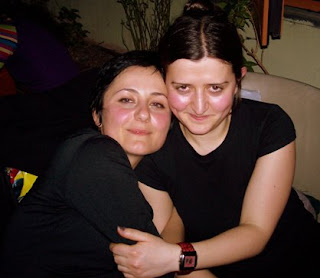 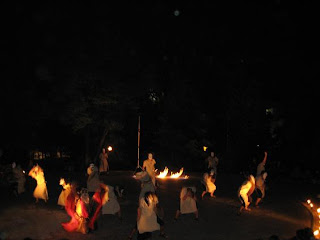 Remember once I told you, I had a park very close my house? But I don't know either why I don't go there often.Maybe it's because I don't have time or I'm not well organised.Anyway...
3 days ago , after feeling devastated from a tiring work day , I decided to have a stroll in the park.Yay!I did the best thing! Hanged I saw an open air theatre's posters: It was Sophocle's "Antigone" .This one ,would be organised in the park on Sunday , 21.00 hour by the drama students of Yeditepe University.
Some notes on Antigone : Antigone is the best-known daughter of Oedipus and Jocastra. However, due to the incestuous nature of their relationship, Antigone is also Oedipus's half-sister and Jocasta's granddaughter.According to the history the city of King Laos (the first husband of Jocastra) was cursed by the temple gods and Jocastra's son would kill his father and marry his mother.Terrifyed by this idea, the king and queen give away their son to be killed and one peasant hangs the baby from his foot.But , the baby is saved by other peasants who give this baby to another king who calls him Oedipus (that means swelling foot in Greek) because of his swelling foot.But when Oedipus growns up , he learns the truth and goes to find his family.On a trip he quarrels with 2 people and kills one of them.When he reaches his family's city , he founds a mourning city because of the killed king.There's also another tragedy in the city ; the Sphynx that kills everybody who's not giving the right answer to his 2 questions.Oedipus comes out as a winner, so Sphynx forgives the city and commits suicide by jumping from a rock.As the city's rescuer , Oedipus is announced as the new king and marries Jocastra (his own mother ) from where they have 4 children (one of them is Antigone).When they learn about the truth , Jocastra commits suicide and Oedipus sticks needles to his eyes.Antigone's sad story (her life and tragic death) is used by many tragic Greek poets.
For more infos have a look here : http://es.wikipedia.org/wiki/Ant%C3%ADgona
The theatre was cool.It so special to watch it in nature..The play's music was great too , performed by some rhythm musicians. 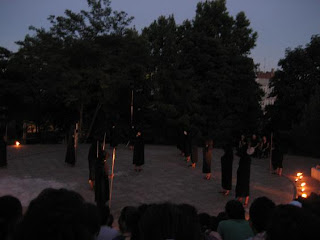 Here you may find 2 photos from this event...

Questionnaire - Which movies scare you to death?

I remember when I was in college (high school) we used to rent a movie each week.We had a "cinema night" each day of the week.
I got so nervous to see my friends , that I knew were scared to death from horror movies , to ask for renting them.I mean where's the point of watching such a movie if you'll scream all the time, hide your self under the cushions and be terrorized?
Me?? I just laughed at those films.Horror films are nothing for me , seriously.
Freddy Krueger? Well ,that's a candy.Vampire movies ? Oh they make me lough loudly...
The "Omen" serial was good at the beginning , but now it sucks.
But I do like the far east horror films such as "Ring" , ""Grudge" , "A tale of two sisters" etc..I think the Far East Cinematography does the best of them.Maybe because of the elements of their culture , they manage to do something particular.At least one can be harrased while watching them.
I feel I'm hearing you asking : Isn't there any movie you are afraid of for God's sake?
Well , there is one in fact..I don't know it's original name but if I translate it from Albanian would be "The house at the island".I have controlled this movies from the imdb , but I have found nothing :( I've been 5-6 years old when I first watched it and I don't remember many things , but I guess it was a Scandinavian movie.
I can't forget the moment the main actress enters to a room filled with dolls.The dolls start crying.I've always been afraid of clowns and some dolls faces.I always have felt they bear something evil under their shining beauty and happy smiles.
And the movie's music and scenes cut was really disturbing.I'm not sure if I'll have the same feeling if I watch that movie now , but this "crying dolls" scene is terrifying.
What about the movies you are afraid of?Let us know.
Shqip: Miq na shkruani per filmat e frikshem qe ju kane bere pershtypje ose qe frikesoheni sa here i shihni!
photo source: www.imdb.com

A life ceased too soon:( 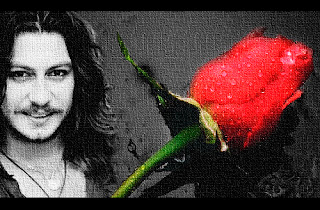 It made me so sad to hear that he passed away yesterday at Bodrum Private Hospital at 11.00 p.m.He had been found very hard injured on 29th of June [his birthday:( ] in a devastated car altogether with his two female friends (the driver was one of the girls , which was his old girlfriend as well).They were going to celebrate Baris's birthday! :(
Their car , crashed to a big trunk and was drifted 30 m.As it was told from the media groups , the driver wasn't found guilty , the problem was the junction they were passing where there wasn't any light.Many people are told to have passed away in that cursed junction.Ironically , nobody has done anything to arrange something!Do they have to wait thousands of other people to die??
What is sad is that he scrambled to live these last 6 days,while the girls passed away immediately.After the second day the doctors told their hopes on recovery of Baris were lessen , but his being young could change everything! I have very strong intuitions and I was sure he'd manage, but alas he didn't!
Baris became very famous after wining the "Academy Turkey" programe a star creating programe held in Turkey like the wellknown star creating programs in all the world (Pop idol,popstar) etc..Many programs like that are being held in Turkey.
Most of the participants used to create any random scandal to get some more ratings and therefore their fame.For most of them , any disgrace was acceptable as long as they were famous.
That is the big difference between them and Barıs.He was such a modest ,easygoing , cheerful person , with not a granule of star complex and had an undiscreibable energy.He was a true gentleman.You could see him talking,having fun ,taking photos,spending time with his fans! You couldfeel his enthusiasim in his eyes all of the time.So much passion and love for music and life!:(
I wasn't a fan of him and in fact I didn't know all of his works , but it broke my heart to see this positive energy bomb , this very special hardly found amicable guy to pass away so meaninglessly:(
May you rest in peace Barış !
You won't be forgotten!
thanks to my friend Tuba for her great photo.you may have a look at her photos here: www.flickr.com/photos/siempre
for more infos on Baris : www.baris-akarsu.com
Posted by eni at Thursday, July 05, 2007 7 comments: 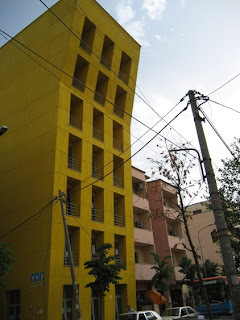