Can we give sorrow a shelter?

All of us have experienced sorrow, once or maybe often.

Reactions to sorrow have been different , though.
Some of us have just hated it , and have tried to escape from it in every possible way ,
whatever its price would be.
Some others, have understood it , never daring to be long time residents in its territories.
And some others have befriended it , learned from it , used it as a life motto, or as a trendy attitude .
Suddenly , the abandonment occurs.
Sorrow is banished from their lives, minds,hearts , and thoughts like a plague suffering dog.
According to Han Yu (chinese writer 768-824) : The seven consistents of emotional make up are: joy,anger,sorrow, love,fear,hatred & desire.A man of superior emotional make up will display these emotions in a balanced manner”
Joy is always wellcomed , looked forward ,valued as one of the best things we are blessed with.I do agree.I love joy and being joyful.I can’t say no to joy.I love to make people happy too.
So is love and desire, except for the socially pervert,unusual,uneasy definited ones.
Anger , Fear and Hatred are also accepted even though they might be hidden ,tried to be limited or suppressed .
But when it comes to sorrow , things change.
Sorrow is not wanted , at least when it looses its sedative desertion charms.
Right after , escape from sorrow begins.
A total sorrow detox takes place , boosted with fake happiness/innovation pills.
But will this heal us?
Wouldn’t it be better if we offered sorow a corner in our soul , share it with the other consistents of our emotions , perceive it , nurture it and approach to it ? Can we offer sorrow a shelter?
Maybe this would be more constructive and realistic., thus would lead us to stronger , non-deceitful self and to a witty life vision.
Below you may read some sorrow related quotes that I like:
1.But the sorrowing are nomads on a plain with few landmarks & no boundaries , sorrow horizons are vague and its demands are few.
Larry Mc.Murtry
american writer

4.Yes, he thought-, between grief and nothing I will take grief.
William Faulkner
(1897-1962)
U.S novelist
5. I was the insider and the outsider.I was at home and I was exciled.I have never been happier , nor have I been sad.
Betty Bao Lord U.S writer
Posted by eni at Monday, March 31, 2008 17 comments:

one day it felt so tired,

at the sea's frenzied waves;

that as an irony to her fate;

but a giant bathtub

of the divine gloominess's emits

Email ThisBlogThis!Share to TwitterShare to FacebookShare to Pinterest
Labels: eni turkeshi photography, this is not a poem:)

Pay attention to these blogs please!

And some important notes from them: (in english, italian & albanian)

Dear friends, all of you are aware of the dimension that violence is getting all over the world. We are feeding our dreams for a better world with dead heros and millions of victims. We are so proud of our XXI century achievments, but we are forgeting one main thing: WE MUST BE HUMANS, first of all. Add the mourning sign to your blog with the phrase ” This blog is Mourning their Death “

Photographs made according to children's paintings!
This splendid creative work was prepared by a korean photographer.Just loved it! 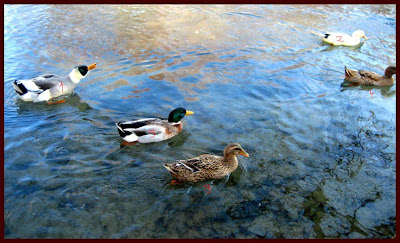 click at the pic to enlarge and see the #
Duck #1 : Hey guys it's Tom Waits night , tonight at the club!Join me!
Duck #2:(thinks): We're going there too, you dumb!
Duck #3: (thinks):look at this jerk..trying to look interesting..hey man you suck..lay your hands off my chick, you bastard!!
Duck #4:(thinks):in fact all i need is a nice sauna therapy..to hell with you boozies!
Duck #5: (thinks):hey hon i'm gonna rock you tonight!

This is all I could think while looking at this photo of mine.Funny , aren't them? :)
Everybody's additional comment is very wellcomed:)

And have a great , funny weekend all of you!

Today I received an interesting notice from "Support the campaign for cancer research" at my fb profile.The notice was as written below:

The Harvard Center for Cancer Prevention has developed an easy and useful tool - the cancer 'DISEASE RISK INDEX' which enables you to calculate your own individual risk of a range of cancers, as well as heart disease, diabetes, and other diseases. So be more self-aware and learn more about your cancer risk today:

You just have to enter this site and fill any of the short questionnaires.You are doing lots of stupid ones:) so take time to see yourself's cancer risk and learn some tips to prevent them as well.
I found it interesting and felt I owed showing you this my beloved virtual friends:)
Posted by eni at Thursday, March 06, 2008 15 comments:

It's been a while I have been tagged by Kim to write the (6,7,8,9th sentences of the 123rd page of the book I'm reading)..
Sorry for my delay dear Kim, I've been really busy and just could hardly finish my albanian book of Artan Fuga "Rrota e mundimit" , plus keeping on with Jerzy Kosinski's "The painting bird" which is another goodie..
"Rrota e mundimit " a.k.a "the wheel of torment" was good ..I enjoyed it a lot..loved his differently reasoning and how he described,argumented on many social aspects.He definitely has an odd , but effective argumenting style.And he's a great observer.I recommend you this one,definitely!

And regarding Kim's book tagging I'm writing down the sentences of an interior design book I'm reading at work , since this one is in english:) at least you'll learn something new on the curtains:)

"When several elements are hung together at one window , the fitting details become more complex.
To make the curtains look full and luxurious use interlining- a soft blanket layer between fabric and lining which will also improve insulation.For a finishing touch,include a border,in a contrasting fabric,running vertically,set in from the edge of the curtains.The border fabric can be of different colour or texture from the main fabric-perhaps a length of old ,delicately patterned silk or paisley cotton".